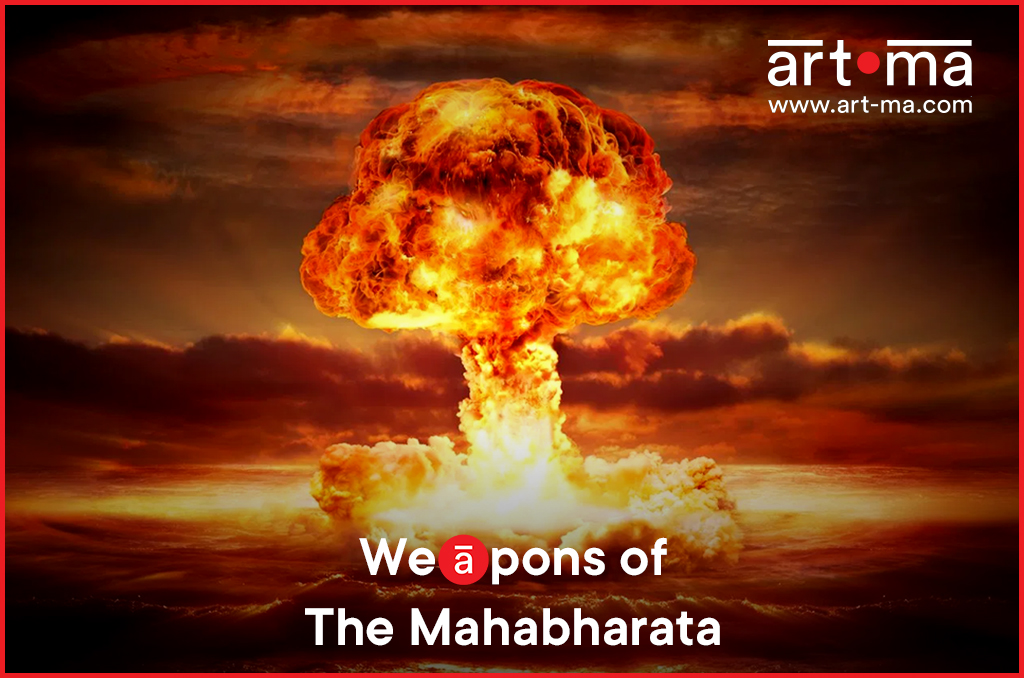 If you read the Mahabharata closely, you’ll find that the five Pandava brothers did not win the war because of their physical strength – they were greatly outnumbered as their warring cousins alone were 100 in total. This was a strategic victory. For the Pandavas and their supporters such as Lord Krishna, the mind was the greatest weapon of all.

Having said that, however, both warring factions also had some mighty celestial weapons at their disposal, which they used intelligently, making for some dramatic action scenes in the epic poem. Here is a list of some of the 47 weapons that have been mentioned in the Mahabharata.

The Brahmastra can be equated with the modern-day nuclear bomb. The weapon manifested with the single head of Lord Brahma at its tip. If released, it could devastate the targeted land, making it barren. All life in and around the targeted area would become extinct. There were very few characters in the Mahabharata who knew how to invoke the Brahmastra. These were Parashuram, who taught Bhishma, Drona and Karna how to use it. Drona, in turn, taught Arjuna. Karna did try to use the Brahmastra against Arjuna in the war, but failed because of a curse placed by Parashuram, who foresaw his student would use this weapon against Arjuna.

This weapon is believed to be four times stronger than the Brahmastra and manifested with four heads of Brahma at the tip. It could annihilate the target through a shower of meteors. The characters in the Mahabharata who possessed the knowledge of the Brahmashirastra include Parasurama, Bhishma, Drona, Karna, Arjuna and Ashwatthama. Arjuna and Ashwatthama used this weapon against each other, but the effect was neutralised after the intervention of sages Narada and Vyasa.

This was Lord Krishna’s weapon of choice. It was a spinning-disc like weapon that Krishna rotated around his index finger. It was made from solar dust and parts of Lord Shiva’s Trishul (trident) by Vishwakarma. Krishna used the Sudarshan Chakra to behead an errant Shishupala during Yudhistira’s Rajasooya Yagna.

This was Lord Shiva’s favourite weapon. Only Arjuna possessed the knowledge of this weapon in the Mahabharata, but he never used it because of its sheer power. When released, the weapon could summon several monsters and a larger-than-life spirit that could destroy the target completely.

This was Lord Indra’s most powerful weapon, which he gave to his son, Arjuna. It was made out of the spine of Sage Dadhichi and was indestructible. The target of this weapon would be struck by bolts of lightning.

This was another weapon, in the form of a dart, that belonged to Lord Indra. It was slightly inferior to the Vajra and could only be used once. Indra gifted this weapon to Karna, who intended to use it on Arjuna, but eventually used it to kill Ghatotkacha.

This weapon belonged to Lord Narayan, an avatar of Lord Vishnu. This weapon could fire millions of missiles simultaneously. The only way this weapon could be disarmed was through complete surrendering just before the missiles hit. Ashwathama used this weapon against the Pandavas, who were saved because of Lord Krishna’s timely warning, asking the Pandava forces to lie down on the ground and surrender to the weapon.

This divine bow first belonged to Shiva who gave it to Lord Indra for safekeeping. Shiva then instructed Indra to give it to Parashurama in order to fight evil forces on earth. Parashurama, in turn, gifted it to his disciple Karna. Every time an arrow was released from the Vijaya Dhanush, the sound created reverberations similar to charged clouds, producing thunder and lightning that blinded the enemy. The weapon was indestructible and the person wielding the weapon remained protected against all other weapons. The Vijaya Dhanush was used just once by Karna during his battle with Arjuna on the 17th day of the Kurukshetra war.

This was a commonly used weapon in the Mahabharata. It took the form of a snake that proved deadly upon impact. It was used by Karna during his fight with Arjuna.

There is no doubt that these weapons were powerful and way ahead of their time. The modern world is still trying to attain the power of these weapons today by way of nuclear weapon technology and stealth technology. But still, these technologies come nowhere close to the power of these mystical weapons. This is a major reason why the Mahabharata will continue to remain relevant for generations to come.