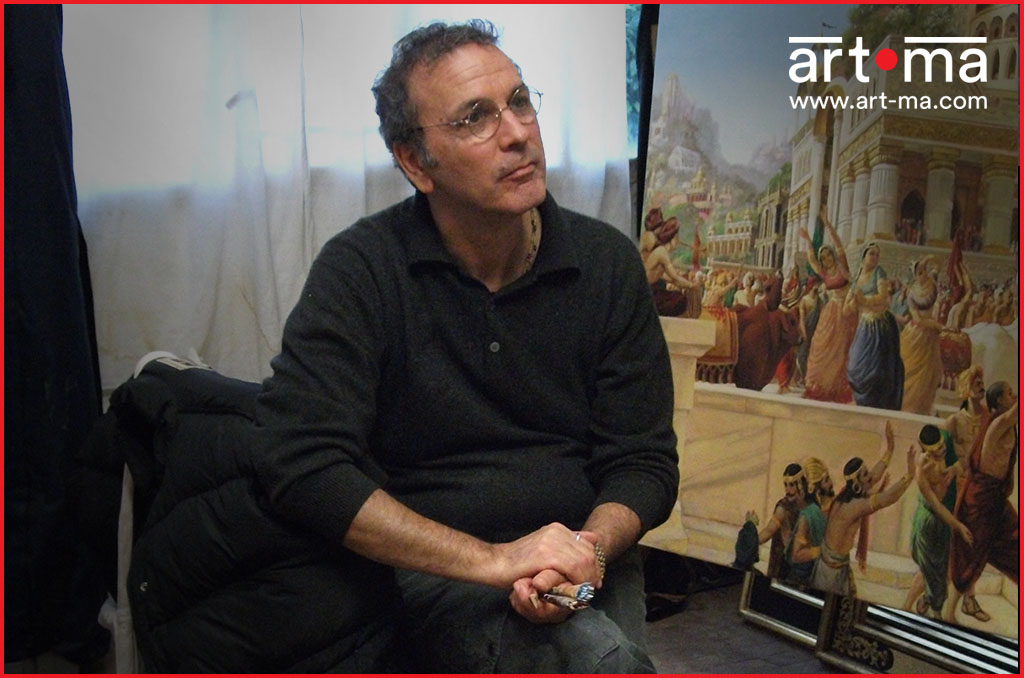 What makes The Mahabharata Collection so unique is that it reflects a seamless amalgamation of two distinct art forms. Italian artist Giampaolo Tomassetti (Jnananjana Dasa) chose the technical yet vivid Classical art form to depict the colourful and passionate tale of the Mahabharata. The result was evidently spellbinding. Here, Tomassetti takes Art-ma through the process of creating these masterpieces.

How did the idea of painting scenes from the Mahabharata come about?

My connection with Vedic culture began when I was 23 years old and living with my wife and my 2-year-old son. I decided to become a Hare Krishna monk and I lived as one for nine years (between 1978 and 1987). I was inspired by sacred texts such as the Bhagavad Gita and Srimad Bhagavatam and began painting Vedic art. I was practicing Bhakti Yoga and had renounced the world. I lived a simple life, read ancient scriptures and made several trips to India. I was also illustrating books produced by the spiritual master and scholar Bhaktivedanta Swami Prabhupada. Then I left the community to start a secular and personal artistic career. In 2008, my friend and artist Pandu Putra (Patrizio Landolfi) approached me with the idea of making several paintings inspired by the Mahabharata, and I agreed to do it.

How long did it take you to paint these artworks and did you face any challenges along the way?

It took me five years to complete the collection — from 2008 to 2013. The entire experience was a challenge. It was a chance for me to make big paintings, not knowing if we could sell them in the end. We had no committee or a place where we could show all the pieces. Then, I had to conduct extensive research on the costumes, architecture and jewellery. Visual descriptions of the landscapes and palaces were hard to come across in the ancient texts. The real challenge, however, was to recall images from my fantasy and merge them with the descriptions mentioned in the Vedic texts.

What is your interpretation of the Mahabharata?

A visual approach tends to reduce the complexity of the text into unique images that synthesise a whole story. Mahabharata is an epic poem that has thousands of verses. A great saga that deals with all human sentiments, both positive and negative. It can be partially compared to western epic works like the Iliad and Odyssey of Homer. But it also represents an individual’s inner fight between contradictions. The good and the bad is a part of each one of us.

Our life seems to be a battle between the two. Mahabharata explains love, hate and greed. It exalts virtues such as family values, humility, wisdom, knowledge, and serves important lessons in social differences, contempt, power and exploitation, richness and poverty — these are all qualities that are inherent in human nature.

How is the Mahabharata relevant in today’s times in your opinion?

As I said before, Mahabharata deals with the entire range of human qualities and emotions. Although conditions since the text was first written may have changed a lot, the human approach to life remains the same. Love, hate, corruption, power, war and ambition are constant. That is why the Mahabharata remains relevant even today and will continue to be until the end of human civilisation. The Mahabharata can inspire us to change our life into a more advanced ethic, moral, ecological and happy society.

What is the common theme running through all these paintings?

First is the stylistic and technical approach. All the paintings are in oil colours on canvas. I’m Italian and therefore I grew up in the most artistic country in the world where I was surrounded by Gothic, Renaissance and Baroque art. For this collection, I thought that the classical art form would be the best approach. All the paintings deal with a psychological crisis. Even the most sweet and romantic pieces involve a problem or contradiction that exhort us to think and feel.

Which one is your favourite painting/paintings in the series? Why?

I love all of them. But some I liked for their complexity (Pandavas entering Hastinapura), some I like for their intimacy (Kunti and Surya), some for their dynamics (The Virat Rupa), and
some for the composition (In the tent). A variety of feelings is the leitmotiv that should be guiding the observer while visiting the gallery.

The way you have styled the Mahabharata characters in the paintings is unique. Can you tell us more about your depiction of the characters?

The Mahabharata clearly describes the character, very often giving suggestions about the expression, the dimension, the beauty or ugliness or even the evilness. So when I read the descriptions of the beauty of Draupadi or Arjuna, I tried to idealise their features. While painting the Gods, I tried to consider their transcendental nature, which exempts them from the laws of material nature that force us to develop functionality in our bodies, such as muscles and bones. A God can have no muscles because He can choose His appearance. Can you imagine the difficulty in trying to render a realistic version of someone you never had an experience of?

All the paintings are minutely detailed. Can you elaborate more on the details by way of examples?

This experience introduced me to several new skills. When I had to paint architecture I became an architect. I had no knowledge of the architectural styles that prevailed 5,000 years ago. So I merged different ancient styles. When I had to paint jewels, I went to see Indian jewellery that was very rich and peculiarly set on the bodies. For the dresses, I became a stylist while choosing the saris and dhotis and shawls. I was trying to capture the different clothes that bend particularly on the bodies creating wonderful folds. While painting landscapes, I became a naturalist, for animals, I became a zoologist, for expression, a little bit of a psychologist and so on. There is a strong fusion of a rational and emotional approach.

Why did you choose to work with Art-ma on this project?

I am happy and proud to launch the collection with Art-ma because their ethos is similar to mine and they truly understood the spiritual message behind the Mahabharata Collection. I look forward to collaborating on future projects with them.