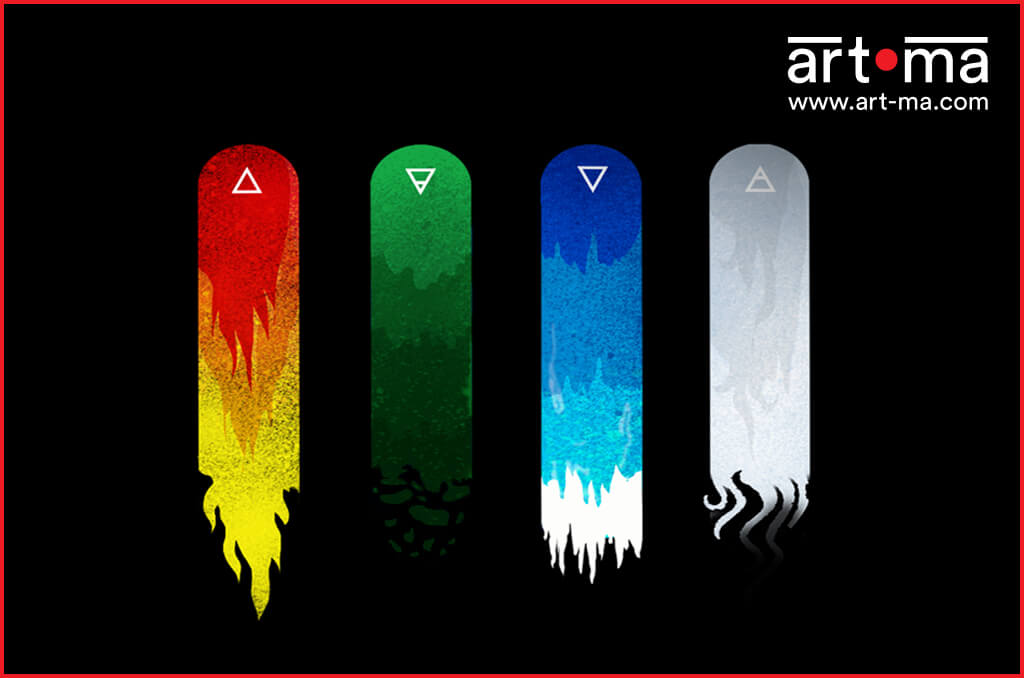 We are surrounded by the five spirit elements – space, water, fire, earth and air. They are such an intrinsic part of our everyday existence that we often overlook their importance in our lives, and even take them for granted. These elements, in fact, are our source for life and without them we would cease to exist. Major religions and philosophies across the world, however, understood their worth and mentioned their importance in keeping the balance around us and within us.

The five classical elements are also the central theme of the virtual art gallery being launched by Art-ma. The gallery includes abstract paintings based on each of the five elements, created by artist Ovidiu Kloska.

While the five elements are common to many religions, their meaning and significance differ. The ancient Greeks, for example, believed that earth, fire, water and air were temporal elements. The fifth element – space – was introduced by Aristotle. He believed that while the other four elements could be easily changed and moved around, space was eternal and remained unmoved with time.

The four elements of earth, fire, water and air also find a mention in Western astrology. The 12 Zodiac signs are divided into each of the four elements. So, while Cancer, Scorpio and Pisces are water signs, Gemini, Libra and Aquarius are considered to be air signs. The fire signs are Aries, Leo and Sagittarius, and if you are a Taurus, Virgo and Capricorn, you will fall under the earth signs.

In Hinduism, the five elements are called Panchamahābhuta. It believes all matter is made up of these five elements. They are all connected to each other and essential for our spiritual growth. Hinduism believes our consciousness or inner self is the source of space. Space in turn, generates air, which creates fire. From fire, we get water that eventually creates earth. Each element, more subtle than the one it creates, is associated with our five senses. The subtlest of all is space, which can only be heard. Air comes next, which we can touch and smell. Fire can be seen, heard and smelt, which is followed by water that can be seen, heard, touched and tasted, while earth can be detected by all five senses.

Chinese philosophy, however, mentions only three of the five spirit elements – water, fire and earth – and instead adds another two to the list – wood and metal. The Chinese believe these elements are constantly interacting with each other in order to maintain balance on earth – popularly known as the Five Elements Theory, which is also used in Chinese medicine, astrology and the ancient practice of Feng Shui.

As you make your way through the virtual gallery, don’t forget to take a step back and recognise the commonality of these elements in the different beliefs that each of us follow. While our differences may be pronounced, they are superficial at best. Look within and you will realise that we are all just a sum of these five classical elements.